Tutorial on Harmonics Modeling and Simulation 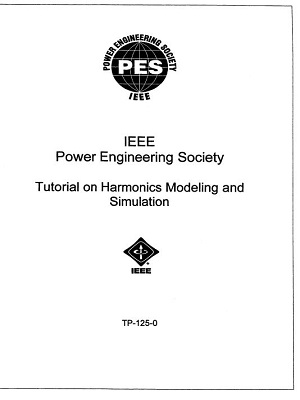 Pages: 85
FOREWORD The problem of power system harmonics is not new. Utilities recognizedthe consequences ofhannonics in the 1920s and early 1930s when distorted voltage and current waveforms were observed on transmission lines. At that time, the major concerns werethe effects of harmonics on electric machines, telephone interference and power capacitor failures. Although such concerns still existtoday, harmonics are becoming a serious problem, potentially damaging consumer loads as well as power delivery equipment because of the substantial increase of harmonic producing loads in recent years. Significant efforts have been made in the past two decades to improve the management of harmonics in power systems. Standards for harmonic control have been established. Sophisticated instruments for harmonic measurements are readily available. The area of power system harmonic analysis has also experienced significant developments and well-accepted component models, simulation methods and analysis procedures for conducting harmonic studies have been established. Harmonic studies are becoming an important component of power system analysis and design. The progress in the area of power system harmonic modeling and simulation and the need of practicing engineers to upgrade their harmonic analysis skills were recognized by the Power System Harmonics Working Group of the IEEE Power Engineering Society and the Harmonics Working Group of the IEEE Industry Applications Society. Under the sponsorship of the Transmission and Distribution Committeein the IEEE-PES and the Power Systems EngineeringCommittee in the IEEE-lAS, the Harmonics Modeling and Simulation Task Force of the PES Harmonics Working Group and the lAS Harmonics Working Group have developed this tutorial on harmonics modeling and simulation. Thepurpose of the tutorial is to summarize the developments in the area from both theoretical as well as application perspectives. Latest and proven techniques for harmonic modeling and simulation are discussed along with case studies. By focusing on the practical aspects of applying harmonic modeling and simulation theories, the tutorial is expected to provide readers with a sound theoretical background as well as practicalguidelinesfor harmonic analysis. We begin the tutorial with an introduction to the objectives and key issues of harmonics modeling and simulation.The theory ofFourier analysis is discussed for applications in power system harmonic analysis. Detailed discussion of modeling of electricnetworks and components including harmonic-producing devices then follows in several papers. Various network solution techniques for harmonic power flow and frequency scan calculations are summarized and case studies are used to demonstrate the practical aspects of harmonic analysis. Three harmonic test systems are presented. Finally, the areas that stillneed further research and development are discussed in the closing comments of this tutorial. This tutorial material has drawn on the considerable expertise of the Harmonics Working Groups and their task forces. The contributors have generously donated their time and effort to what we believe will be a valuable reference work on the subject. In addition, guidance and encouragement of Mr. Tom Gentile, Chair of the PES Harmonics Working Group and Dr. Mack Grady, Chair of the General Systems Subcommittee of the PES T&D Committee made our task much easier. Dr. M.E. El-Hawary, Chair of Life Long Learning Subcommittee of the IEEE Power Engineering Education Committee, provided generous support to many aspects of this activity. We wish to take this opportunity to thank all contributors for their effort in completing this task. Mark Halpin, Tutorial Editor Wilsun Xu, Tutorial Organizer and Chair, PES Harmonics Modeling and Simulation Task Force Satish Ranade, Past Chair, PES Harmonics Modeling and Simulation Task Force Paulo F. Ribeiro, Vice Chair, PES Harmonics Modeling and Simulation Task Force Download Full Version
Tags:
Harmonics
Click the links below to access the components of this bundle.

Institutional Subscribers:
Society Members:
IEEE Members:
Non-members:
Only Available for Purchase As Part of a Bundle.