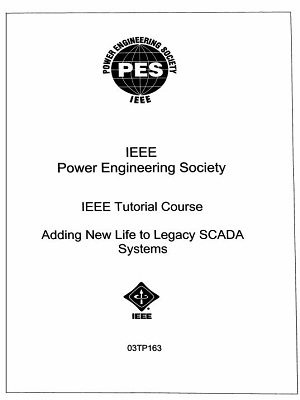 Pages: 85
Session 1 What is a Legacy System Introduction The electric utility SCADA (Supervisory Control and Data Acquisition System) system is now a mainstay. Most electric utilities have a means to monitor their power system activity and control substation equipment from a central location that would be classified as a SCADA system. The long sought improvements in efficiency promised by upgrading manned substations to monitored substations have been largely achieved. It has taken many decades to get to this point. There has been a long evolution of technology and change that has brought SCADA technology this far. While Substation Automation is considered current technology, it is valuable to understand the steps in technological evolution and to recognize that some of that history is still in use in utilities today. They are called "legacy" systems, in perhaps a negative way, but given the reluctance ofUtilities to renew infrastructure based solely on technology improvements, it is reasonable to expect to have to find a way to blend the new back to the existing. Some technologies surrounding SCADA systems have not changed significantly in 60 years and perhaps those are ready for a technology re-birth. However, their ancestors will remain until they are forcibly dragged to the scrap yard. Certainly the evolution in computer technology that helped drive the SCADA systems in their infancy has seen many significant changes. In the substation, microprocessor technology that gave birth to the Intelligent Electronic Device (lED), opened the opportunity to combine functions and has significantly changed the landscape for the substation interface. This session will trace the changes from early technology to the Substation Automation System. It will discuss the functions that exist for SCADA or Automation Systems and identify the significant changes that have occurred along the way.
Tags:
Substations
/content/rc/pes/en/technical-publications/tutorial-papers.html
https://www.ieee.org/cart/checkout/page.html