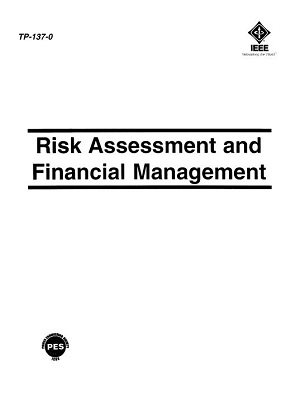 Pages: 65
I. INTRODUCTION The Risk Assessment and Financial Management Tutorial is intended to be a practical introduction to the tools and techniques that are commonly used to identify, model, and manage risk. The result is a distilled mixture of concepts from fmance, power system modeling, and practical decision making. Whenever possible, examples are used to demonstrate the use of new techniques, and most of the examples are taken directly from power industry applications in an effort to bring the lessons as close to home as possible. As Electric Industry Restructuring brings more and more players into energy markets around the world, the number of opportunities for power producers and marketers is increasing as well. A parallel goal of the tutorial is to stimulate new ideas and new applications of the techniques that follow. The germ for growing these opportunities lies in the fertilization of the power industry with concepts from competitive markets, which in tum is creating demand for new tools and techniques to analyze and operate those markets. We hope that during the course of the following lessons, you will do your best to visualize the use of these tools in your own work environment and place special emphasis on applications where they can be applied with the most impact. We know the electric power markets to be extremely volatile, possibly more than any other market, with prices routinely swinging by orders of magnitude (even sign) within a few hours. Already, many companies have learned the hard way that risk assessment and financial management are crucial to the success in their businesses. Hopefully, by instilling new applications like the ones described here and the ones that we can dream up together, the learning will get easier. The tutorial begins by introducing the most common fmancial instruments through examples along with basic mathematics that supports the analysis. The frrst part of the tutorial deals with traditional financial concepts such as futures contracts and options, the methods of analyzing their value, and when they are most useful. Here, examples from both power and fmancial markets are used to convey these principles. The second part introduces the topic of decision analysis, wherein complex decision-making problems can be structured and the tradeoffs made clear. This technique is most useful as a means to communicate and assess alternatives. The third and final section investigates three simple examples of risk management in the electric power business. These valuable examples attempt to pull together many of the techniques introduced earlier in order to demonstrate how they are used in practice. The tutorial wraps up with a concluding section that describes next steps for investigation by interested students. II. CONCEPTS OF DERIVATIVES A. General Concepts In a deregulated electricity market generators are competing, customers have more choices, and the electricity itself is treated as any other commodity. There are increased opportunities, and where there are increased opportunities, there are also increased risks. Participants in deregulated markets engage in trading to hedge against the risks arising from uncertain price movements and other uncertainties. Perhaps the most attractive attribute of trading in deregulated markets is flexibility along with limitless opportunities. Although trading covers a history of several millennia, it has only within the last decade become more standardized, regulated, and its mechanisms better understood. Trading refers to the transactions that take place directly between two parties or through an organized exchange. The oldest organized trading market was in agriculture. Even today the world's largest commodity exchange, the Chicago Board of Trade was founded in 1848 exchanging primarily wheat futures. In the energy sector, in the late nineteen-seventies oil was the frrst commodity traded through a formal exchange followed by natural gas that started to be traded in 1990 (1992 in Canada). In 1996, electricity futures started to be traded on the New York Mercantile Exchange (for the Western US).
Tags:
Risk System Economics Probability Reliability
/content/rc/pes/en/technical-publications/tutorial-papers.html
https://www.ieee.org/cart/checkout/page.html