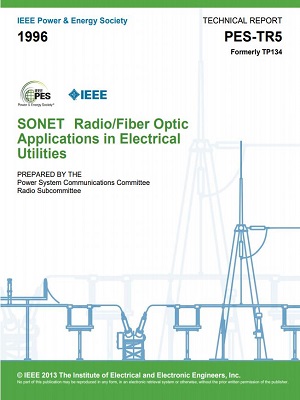 Pages: 59
FOREWORD Since 1989 there has been an increasing interest in and application of SONET Fiber Optic applications in Electrical Utilities. SONET is an acronym for Synchronous Optical NETwork protocol. The purpose of SONET is to provide a digital hierarchical multiplexing scheme incorporating a modular family of rates and formats for optical interfaces. In the past four years, interest in SONET Radio applications has accelerated to the point that major manufacturers have developed SONET Radios to provide a seamless interface with the existing and future SONET Fiber Optic installations. In North America, SONET Telecommunication Products are superseding Asynchronous Products to enable direct synchronous payloads. For instance, the SONET STS-1 payload envelope plus transport and path overheads is superseding the Asynchronous DS-3 payload envelope. The primary contributors to SONET development are ANSI and Bellcore. Concurrently with SONET development, CCITT (ITU-T) has developed the Synchronous Digital Hierarchy (SDH) protocol. These two protocols (SONET and SDH) are nearly identical. SDH has been selected world wide with the exception of North America. In response to the interest in SONET Radio described above, the IEEE PES Power System Communications Committee scheduled a panel session on the subject at the IEEE Summer Power Meeting in July, 1993. The panel included a lead technology paper on the Basics of SONET, followed by a number of contributions giving Electric Utility perspectives, and a final paper addressing the future of SONET Radio Development. At the time of the panel session, the SONET Radio was in the development stage. The PSCC Radio Subcommittee and Panel Session participants (authors) agreed that a Special Publication based on the presentations at the panel session would be more useful if it were published after the SONET Radios were commercially available; this was anticipated at the time to be the end of 1993, but in actuality was the end of 1994. The material included in the individual papers which comprise the Special Publication has been updated through September 1995. In addition the Special Publication includes: (a) For illustrative purposes, a brief SONET/SDH comparison, (b) a newly authored paper (July 1995) describing a current Federal Power Agency SONET Radio/Fiber Optic project along with future SONET Radio/Fiber Optic plans, and (c) an Appendix with information on the commercial SONET Radio products referred to in the Panel Session papers. This Special Publication is expected to provide a valuable reference for SONET Radio/Fiber Optic Systems in the future. September 1995 Panel Session Organizer: Donald J. Marihart, Chairman of the PSCC Radio Subcommittee Special Publication Editor: Donald J. Marihart, Vice Chairman of the Power System Communications Committee (PSCC) Download Full Version
Tags:
Power System Communications
/content/rc/pes/en/technical-publications/technical-reports.html
https://www.ieee.org/cart/checkout/page.html