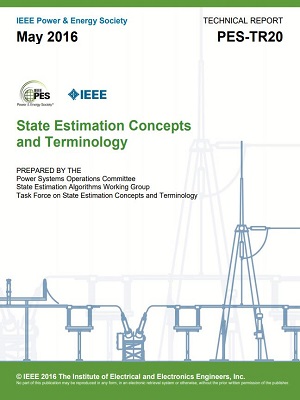 pages: 14
1. SCOPE This technical report provides the terminology and definitions used in the formulation of a state estimation problem and provided in the output of commercially available state estimation software. 2. BACKGROUND INFORMATION Since its introduction in the 1970s, power system static state estimation has received numerous technical contributions and has undergone substantial improvements. Various terms were coined by different contributors sometimes referring to similar concepts. Though most of the terms are well understood, there are some whose definition may not be agreed upon or clear, leading to misunderstanding of the concepts being conveyed by them. During the 2008 IEEE PES General Meeting held Pittsburgh, Pennsylvania USA, the Working Group on State Estimation Algorithms decided to form a task force on "SE Concepts and Terminologies" with an objective to create a consistent reference document that includes the set of definitions of various terms/concepts that are often used in the context of State Estimation. During the 2009 IEEE PES General Meeting held in Calgary, Alberta, Canada, the working group discussed this and decided to move forward in starting the activities for this task force.
Tags:
PSOC
/content/rc/pes/en/technical-publications/technical-reports.html
https://www.ieee.org/cart/checkout/page.html