An Introductory Discussion on Aeolian Vibration of Single Conductors 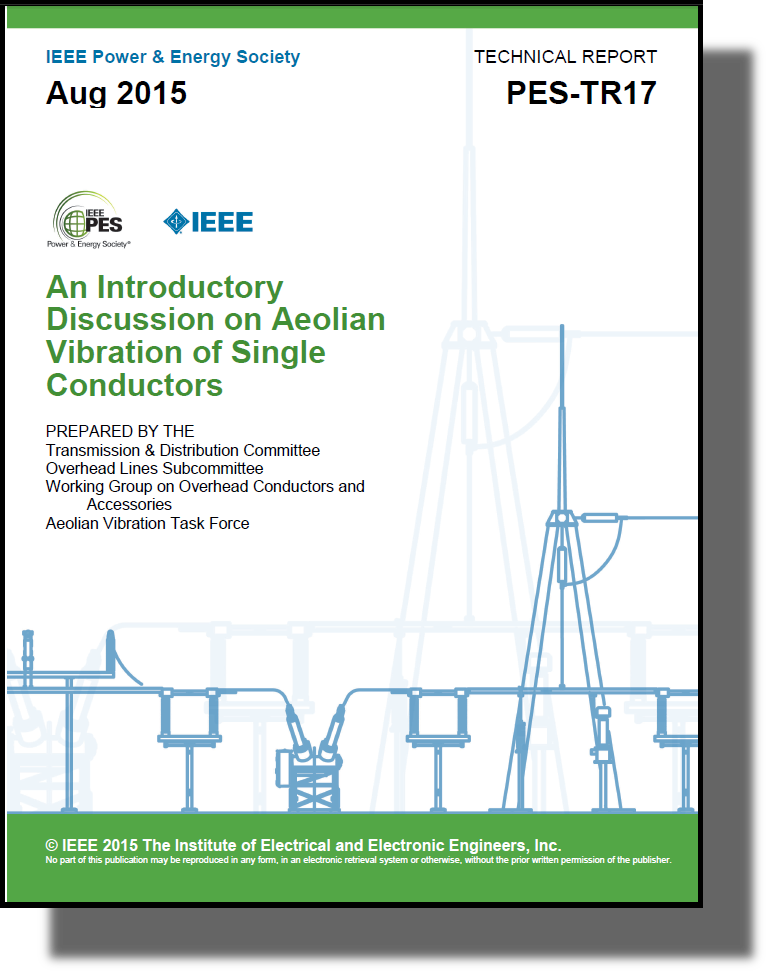 Pages: 38
1 Introduction Overhead conductors are constantly moving in response to weather conditions. These weather related movements vary in visibility and intensity from low-frequency, high-amplitude movement, often referred to as Galloping; to higher-frequency, lower-amplitude movement, known as aeolian vibration; to induced movement such as wake-induced oscillation, which can occur within phases using bundled conductors. This document addresses only aeolian vibration on single conductors, and is to be treated as an introductory guide. 1.1 Purpose and Objective This guide is intended to provide a baseline understanding of aeolian vibration of single conductors and should be considered an introductory synopsis of the topic for engineers new to the industry. An introductory overview of aeolian vibration and the associated damages resulting from this conductor motion is presented. Considerations for safe line design tension to minimize potential damage from aeolian vibration and the use of dampers to limit wind induced vibration to non-damaging levels is also discussed. 1.2 Scope This guide reviews basic principles of aeolian vibration of single conductors made with round-wire strands and having either a steel- or aluminum-core, and is not intended to provide an exhaustive discussion of aeolian vibration. The guide specifically excludes aeolian vibration on bundled conductors. References are provided at the end of the document if the reader wishes to review additional information. 2 What is Aeolian Vibration? Note: Definitions are listed in Appendix B. Steady or laminar (i.e. non turbulent) winds of low to moderate speeds passing over a long cylindrical shape produce trailing vortices. A bare (i.e., no ice attached), single conductor on a transmission line is therefore the ideal candidate for creating these vortices. Small forces at right angles to the wind direction are generated by these vortices and the frequency of these vortices is close to one of the natural frequencies of the"aeolian vibration". All tensioned aerial cables such as conductors, shield wires, guy wires, Optical Ground Wire (OPGW) and All-Dielectric Self-Supporting (ADSS) cables are subject to aeolian vibration, which is characterized by relatively high frequency (ranging from 3 to 150 Hz) and low peak-to-peak amplitude (ranging from 0.01 to 1 times the conductor diameter) conductor motion. If the bending caused by aeolian vibration movements is large enough and left unchecked, aeolian vibration can lead to the catastrophic failure of overhead lines due to fatigue breaks of either the conductor strands and/or the support systems at suspension clamps or other attachments. Uncontrolled vibration has also been identified as the cause of damage of insulator strings at supporting hardware connection points, and to the loosening of tower bolts.
Tags:
TandD
/content/rc/pes/en/technical-publications/technical-reports.html
https://www.ieee.org/cart/checkout/page.html