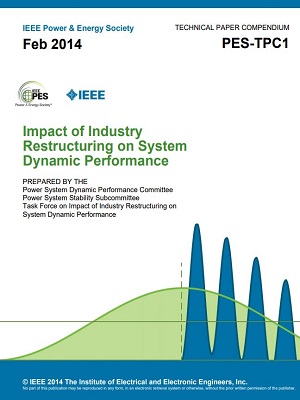 The power industry has undergone significant changes worldwide since the late 1990's with the deregulation and privatization of electricity markets. This process has brought up a number of issues regarding power system stability and control in the context of competitive markets that were not a factor in vertically integrated electricity markets. Thus, in the traditional electricity market structure, power system security was centrally managed, with system operators making decisions on generator and load control and dispatch, such as voltage and frequency regulation or load shedding, to guarantee system security without the need to consider and interact with the various market players, since a single company owned, managed and operated most of the generation, transmission and distribution system assets. However, in a competitive market environment the traditional mechanisms to maintain system security, which have not significantly changed, may have substantial financial consequences for the different market participants, as in the case of generators not being dispatched due to transmission system congestion issues. Since the importance of maintaining dynamic system security is well known to every market participant, dispatch and control decisions in competitive electricity markets are still centrally made by system operators, which are independent from all the rest of the market players, but using market mechanisms that recognize the multiple ownership of the system assets, such as reserve markets or payments for significant reactive power support. This has led to the clear recognition that system security has a direct and sometimes, under stressed system conditions, significant economic impact on electricity markets and thus the price of electricity for the system customers.

The aforementioned issues led the Power System Stability Subcommittee of the Power System Dynamic Performance Committee to the creation of a Task Force (TF) entitled "Impact of Industry Restructuring on System Dynamic Performance," to investigate the effect of competitive electricity markets on power system dynamic performance and vice versa. To accomplish its mandate, the TF organized the following three panel sessions: "Impact of Industry Restructuring on System Dynamic Performance" at the PES General Meeting in June 2006 and a follow up panel at the Power Systems Conference and Exposition (PSCE) in November 2006, and a panel entitled "The Effect of System Security on Electricity Markets" at the PES General Meeting in July 2008. The first two panels: objectives were to (i) survey system dynamic performance management under various power market and trading arrangements around the world with emphasis on the comparison before and after restructuring, and (ii) review the current development of new tools for dynamic performance management, such as stability constrained optimal power flows. The third panel concentrated on discussing the impact on electricity pricing of various approaches to represent security constraints in market clearing procedures, in view of the fact that day-ahead electricity markets provide dispatch solutions based on economic grounds, but do not generally consider explicitly security issues, whereas real-time markets, which span a shorter time horizon of five minutes to one hour, must emphasize security as a consequence of being close to real-time operation. Thus, in this panel, industry and academic experts provided an overview of practical and proposed security-driven market clearing procedures to assist system operators with clearing such short-term markets, considering on the effect that the different approaches have on electricity pricing.

This special publication is a compendium of the papers presented at the aforementioned panels. The papers are organized in two groups, based on their perspective, namely, industrial or academic. The papers with an industry perspective concentrate on presenting and discussing the impact on system security and electricity pricing of existing auction mechanisms and tools used in electricity markets, describing as well possible or proposed improvements to these techniques. On the other hand, the papers with an academic perspective mainly describe novel and "futuristic" methodologies to properly represent, manage and price system security in electricity market auctions, considering its impact on electricity markets. A brief summary of the various papers contained in this special publication is presented next.