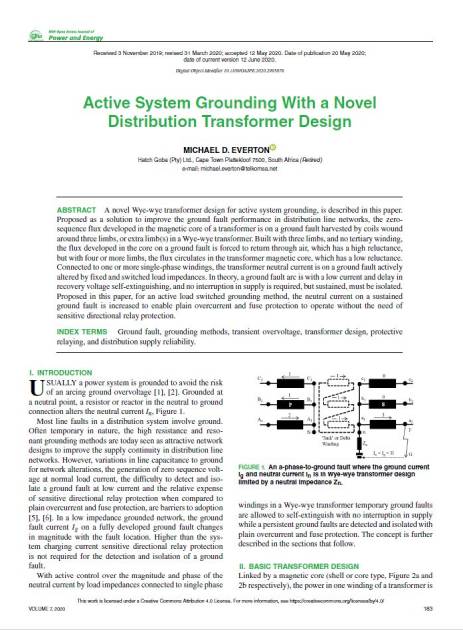 Pages: 8
A novel Wye-wye transformer design for active system grounding, is described in this paper. Proposed as a solution to improve the ground fault performance in distribution line networks, the zero-sequence flux developed in the magnetic core of a transformer is on a ground fault harvested by coils wound around three limbs, or extra limb(s) in a Wye-wye transformer. Built with three limbs, and no tertiary winding, the flux developed in the core on a ground fault is forced to return through air, which has a high reluctance, but with four or more limbs, the flux circulates in the transformer magnetic core, which has a low reluctance. Connected to one or more single-phase windings, the transformer neutral current is on a ground fault actively altered by fixed and switched load impedances. In theory, a ground fault arc is with a low current and delay in recovery voltage self-extinguishing, and no interruption in supply is required, but sustained, must be isolated. Proposed in this paper, for an active load switched grounding method, the neutral current on a sustained ground fault is increased to enable plain overcurrent and fuse protection to operate without the need of sensitive directional relay protection.
Tags:
pes transient overvoltage protective relaying distribution supply reliability ground fault transformer design 2020 ieee grounding methods OAJPE Everton Technical Publication
Click the links below to access the components of this bundle.

Institutional Subscribers:
Society Members:
IEEE Members:
Non-members:
Only Available for Purchase As Part of a Bundle.