NEW AND IMPROVED USER EXPERIENCE! Upon login, the IEEE Resource Centers now recognize products that are available free to the user and, if one of those free products is selected, the user will immediately be able to play the video or download the PDF!
/content/rc/pes/en/education/webinars/PES_Ed_Web_Microgrids_070620
WEBINAR
Society
LIVE_WEBINAR 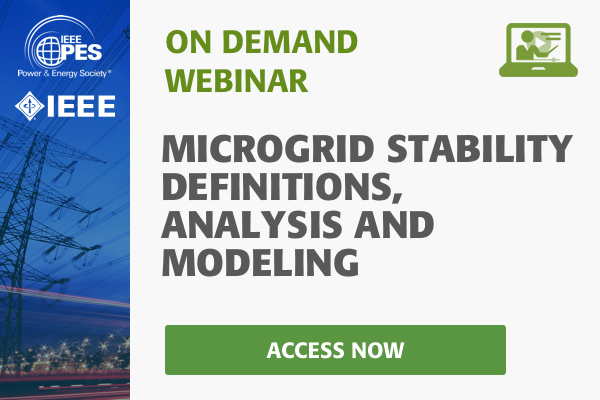 Time: 01:30:00
The panel will focus on reviewing in some detail the Microgrid Stability Definitions, Analysis, and Modeling TF report, sponsored by the IEEE PES Power System Dynamic Performance Committee. Thus, the proposed microgrid stability definitions and classification will be first presented. The various models of the different microgrid components such as diesel generators, converters, RES, and associated controls, feeders, load models, and energy storage, will also be discussed, as well as the analysis techniques and tools used for stability studies. Finally, various examples of stability problems, controls, and modeling will be presented.
Tags:
Microgrid modeling stability Power System Dynamic Performance Committee PES PSDP analysis IEEE dynamics
Click the links below to access the components of this bundle.