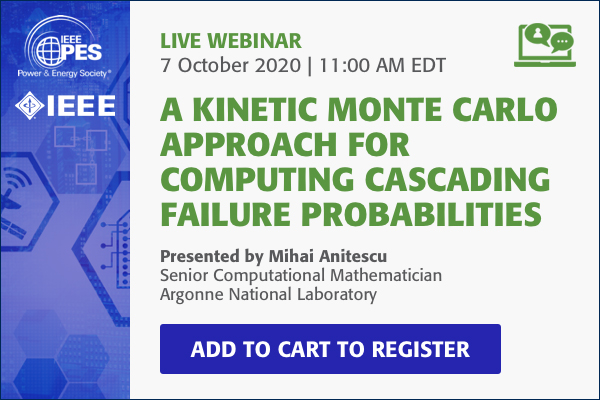 Time: 01:00 (45 min of instruction followed by 15 minutes of Q&A)
This Webinar: In power grid planning, operating points are set so that power generation can safely satisfy projected power demand until the next setpoint. Between setpoints (~10 minutes), the grid is subject to parametric uncertainty in demand and generation levels. These variations can cause the grid's autonomous feedback systems to initiate fault-protection mechanisms that may de-energize infrastructure components and spread throughout the network. In severe cases, these sequences of actions may result in the loss of power in significant portions of the grid. Such cascading failures are rare and difficult to study empirically, and in this talk, we discuss one approach for characterizing the distribution of cascade severity due to parametric uncertainty in demand and generation. Specifically, using a stochastically perturbed, first-principles dynamical model of the power grid, we build a kinetic Monte Carlo (kMC) model of component failure, which in turns allow to much more efficiently simulate from the distribution of cascading failures. To do compute the kMC model, we utilize results from large deviation theory in combination with simulation tools developed for studying chemical reactions; the cost of computing the conditional probability of one failure (one transition) is roughly the cost of one Optimal AC Power Flow calculation. We will discuss possible extensions and usage of such information for operations and planning.
Tags:
cascading failures ieee PES
Click the links below to access the components of this bundle.